In the morning when you get out of bed and put your first foot on the ground, do you feel stiffness in your body? Do you experience intense pain in your joints which gradually subsides as you start getting along with your daily chores? If you are suffering from such symptoms then it is very likely that you are suffering from Rheumatoid Arthritis. In Ayurveda, Rheumatoid Arthritis is called "Aamvaat". Let us learn more about this disease and see how we can benefit from Ayurvedic treatment for this disorder.

The number of patients suffering from Rheumatoid Arthritis is increasing day by day due to faulty lifestyle. Incidence of this ailment in women has been found to be two to three times higher than in men. This disease has been seen to be common among women who are in the beginning of their child bearing age of 20 to 30 years or during menopause with a history of miscarriage or abortion.

The causes of this disease have eluded modern science and the disease is not attributable to any one particular cause. However, it is generally accepted that the disease arises due to malfunctioning of the body's immune system. The immune system gives us the strength to resist diseases. It creates antibodies against any foreign body that enters our system. In the case of Rheumatoid Arthritis, the body's immune system starts creating antibodies even without the presence of any foreign bodies. As the number of antibodies increases, they start attacking the healthy cells in the human body. It is like a country's army bombarding its own civilian settlements. Thus, Rheumatoid Arthritis is categorized as an "Auto Immune Disease'.

According to the Ayurvedic system of medicine, this ailment stems from the formation of endotoxins called "Aam". "Aam" is basically undigested and unassimilated food in our body. This "Aam' is formed due to the malfunctioning of the digestive system. It is primarily formed due to the intake of incompatible foods. A classic example of incompatible foods (i.e. foods opposite in nature) would be eating tomato ketchup with milk or radish with milk etc. "Aam' also results from leading an unhealthy lifestyle that promotes constipation. Ingestion of stale food, defrosting, reheating eatables, exercising soon after a meal, mental tension and stress – all these factors affect our digestive system adversely and promote the formation of "Aam". It is a viscous and dense fluid that looks like mucus in the stool. "Aam' often gets deposited around joints and causes intense pain and hence Rheumatoid Arthritis. It is against this "Aam" that our immune system creates antibodies.

The primary symptom of this disease is the occurrence of unbearable pain with stiffness due to inflammation in joints. This ailment often originates as pain and swelling of the middle finger in the hand. Soon it spreads to other fingers. Very often similar joints of both (hands, feet) stiffen, ache and swell simultaneously. The pain in the joints is acute in the morning and gradually subsides in a couple of hours after some physical movements. Joint pains remain moderate during the day time and increase sharply at night once again. The patient often feels heaviness, lethargy, mild fever and fatigue without effort. Besides these, symptoms like sleepiness during the daytime, insomnia at night, constant regurgitation in the stomach, flatulence and constipation are also common.

The symptoms of this disease are generally confused with two common diseases of joints – Gout (Vaat-rakt) and Osteoarthritis (Sandigdh-vaat).

Gout occurs due to an increase in uric acid in the body. Gout originates as pain and inflammation of the big toes and heels of the feet. Soon all the toe and finger joints swell and ache. "Frozen Shoulder' and "Frozen Hip' respectively.

The body should be kept warm at all times. Joints should not be bandaged tightly as this limits movement and interferes with the free circulation of blood. There should be plenty of indirect ventilation in the bedroom. Rest is advised when there is acute inflammation in the joints. Sea bathing has been found valuable in arthritis. The natural iodine in sea water is said to relieve arthritis pain. As is well known, iodine regulates the acid-alkaline balance in the blood and tissues, helps to repair and regenerate worn out tissues and nourishes the skeletal structure. It enters into the thyroid gland's secretion. The hormone uses the iodine to cleanse the internal toxins. If sea bathing is not possible, the patient should relax for thirty minutes every night in a tub of warm water, in which a cup of common salt has been mixed. The minerals in salt, especially iodine, will be absorbed through pores of the skin. This will help correct an internal imbalance. 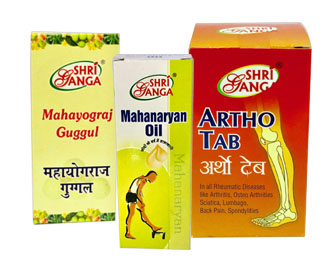