Importance of blood in our body?

Blood is a part of the fluid component in the body which supplies nutrition and oxygen to each and every part of the body and transports the waste materials from them to be eliminated out. The blood is a complex tissue with many components like fluid, water, salts, minerals, proteins, lipids and glucose. RBCs, WBCs and platelets are the major cellular components of blood.

Deficient red blood cells or Hemoglobin in blood result in Anemia. It is marked by paleness of the skin and generalized weakness in the body. Anemia is one of the most common blood disorders which affects a large number of people especially, women in the child bearing age group. In these women, there are chances of excessive blood loss during menstruation which may result in anemia. In pregnant women, there is an increased demand of dietary energy to sustain the health and growth of the mother and the fetus. As a result, the daily requirement of Iron by the body is also increased significantly. Young children may also get affected by some form of Anemia. The types of Anemia that occur by birth are usually inherited and very difficult to treat. Anemia similarly affects the elderly people. In them, it is most often caused by association of long standing disease conditions and improper diet.

There are many types of Anemia which can be broadly classified under the following headings:-

Anemia is known as pandu roga in Ayurveda. Pandu is an ayurvedic term which means "pallor". The term signifies the pale coloration of the skin of an anemic patient which is a characteristic feature common to all types of Anemia.

It happens due to deficiency of iron. The iron deficiency occurs due to blood loss or due to poor absorption of iron and poor diet. Gastric bypass surgery has also shown the anemia in many cases.

Herbal remedies for all types of Anemia

As per Ayurvedic point of view Pitta is mainly imbalanced in this type of disorder. Shri Ganga Pharmacy provides best combination of effective herbal remedies such as Anemia Care Pack for ayurvedic treatment of all types of anemia. These herbal remedies are prepared from using best quality herbs and strictly follow the principles of Ayurveda. All these herbal remedies of Shri Ganga Pharmacy are 100 percent pure, natural and vegetarian. These are free from chemicals, additives and preservatives. These are safe to use as these are free from side effects. 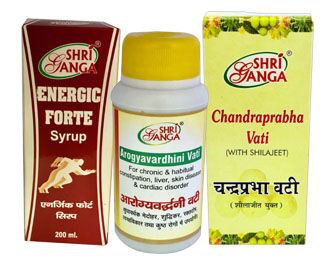